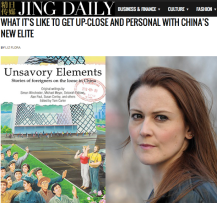 “A lot of expat writing can lapse into the ‘us and them’ realm, and this is something I particularly wanted to avoid. If my story has in any way contributed to the insidious ‘otherisation’ of China and Chinese people, I regret that sorely. I dislike the East/West binary – it’s a cheap shot and an indulgently easy gambit.”

“Susie Gordon’s ‘Empty from the Outside’ is a pointed look at Shanghai’s second-generation rich, who appear to have neither ambition nor moral compasses; it’s a tale of wealth and hedonism that would make Brett Easton Ellis proud.”

“…Susie Gordon’s essay ‘Empty from the Outside’. This young English journalist arrived in China in 2008 and has been covering China’s business culture for local media. She is one of the newer voices this collection presents, and her expose in Unsavory Elements about the excesses of her wealthy business partner’s second-generation ‘fu er dai’ sons, is a highlight of the book.”

“Certainly interesting is the glimpse offered by Susie Gordon – a Shanghai-based writer and journalist – into the life of her adoptive city’s wealthy élite. While facts about the crème-de-la-crème of China’s capitalists are known, it is uncommon to come across a tale which so vividly describes the decadence of the nouveau riche. The anecdote begins with the author joining her former business partner Zhou Ning for drinks at an upscale wine bar and ends in an expensive apartment where Mr Zhou’s son – who does not work because ‘he does not need to’ – is getting high on drugs with his friends. In between lies the description of the unrestrained luxury, debauchery and general lack of morals of the ‘fu er dai,’ the princelings whose motto is spend until you drop.”

“However, the two stories that have generated the most buzz among readers and critics take place during nights of excess: ‘Empty from the Outside’ by Susie Gordon about her evening out with wealthy sons of businessmen in Shanghai, and ‘Unsavory Elements’ by Carter on a lads’ party gone wrong…”